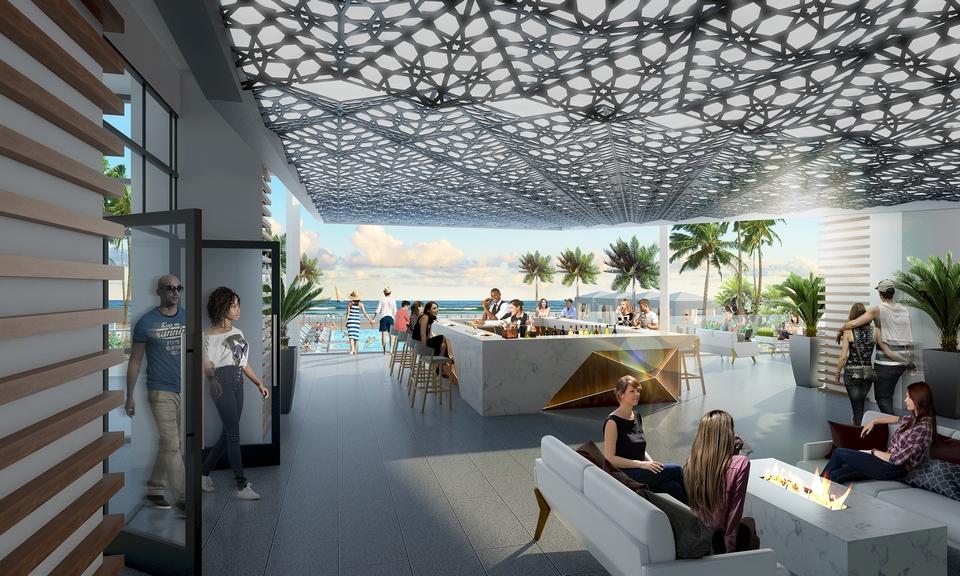 Digital art that reacts to body movements. A glass pool shaped like a giant martini glass with live performers splashing around inside. A section of wall that becomes a guestbook everyone can sign.

Those are the types of things that could fill a new Marriott Renaissance Hotel planned to open in two years on an oceanfront site about a half-mile north of the Ocean Center. The force behind the cutting edge hotel, Premier Resorts & Management Chief Operating Officer Samir Naran, said it won’t just be a place to sleep or hold a meeting. It will be a one-of-a-kind experience.

“This will be a different caliber hotel,” Naran said. “The whole idea is you’ve arrived and you’re leaving the world behind.”

“You’re going to see something here that doesn’t exist yet in Daytona Beach,” said Cobb Cole attorney Rob Merrell, who’s representing Premier Resorts & Management on the project. “It blew me away. There’s nothing like it here.”

Marriott has more than 160 of its Renaissance brand hotels scattered around the globe everywhere from Paris to Bali, Dubai to Atlanta. There are eight Renaissance hotels in Florida, including two in Orlando, but this will be the first in Volusia County.

Naran hopes to begin construction on the Daytona Beach Marriott Renaissance in April or May. But first he needs to get a written agreement with the city and rezoning approved to accommodate his plans.

The project is estimated to cost $35 million to $45 million. Premier Resorts & Management isn’t asking for any government money, and it’s not asking for the beach driving behind its hotel to be removed.

“We’re trying to do something that embraces the culture of the community,” Naran said.

The Renaissance is just the latest piece of good news for oceanfront hotel development in Daytona Beach. There are several other major hotel projects in development or already under construction, including a new Hard Rock Hotel, Protogroup’s massive condo hotel, a Courtyard by Marriott and a Lotus boutique hotel.

Renaissance is one of Marriott’s luxury brands that prides itself on delivering the unexpected to hotel guests, and one of its slogans is “business unusual.” The company boasts that its hotels are like snowflakes — no two are alike.

Renaissance hotels also weave in some of the familiar so the properties have the feel of the neighborhoods they’re in. What that will mean exactly in the case of the Daytona Beach Renaissance that will be located north of Seabreeze Boulevard is still under development. Naran said he had to submit to Marriott a design and narrative about Daytona Beach that are under review.

The four-star Daytona Beach Marriott Renaissance will be located in what is now the Ocean Breeze Club at 640 N. Atlantic Ave. Naran’s company bought the property, once a Spring Break hot spot, two years ago for $13.5 million.

When the property overhaul is finished, there will be a completely renovated 190-room oceanfront hotel with a six-level parking garage across the street. The nearly 300-space parking garage site at 605 Glenview Blvd. is now a surface parking lot. The garage, which will be available only to hotel and restaurant guests, will include a neighborhood police substation on the first floor.

The 11-story hotel will become the home of a seafood-based restaurant overlooking the water with space for about 110 people to dine inside and another 75 outside. The company that will run the eatery, Atlanta-based Concentric Restaurants, has created restaurants everywhere from San Diego to Chicago to the Orlando area with Luma, Prato and Luke’s. Concentric Restaurants owner Bob Amick said he’ll design a casual, moderately priced dining spot geared toward the Daytona Beach market that will also offer an “incredible wine list.”

The resort-style hotel will also feature outdoor lawn space for special events like weddings and parties as well as a pool, private cabanas, fitness center, ballroom and meeting spaces.

Mayor Derrick Henry called the planned hotel renovation “a beautiful project” that “sends a message of the type of tourists we can have year-round.”

“It’s just what we desire to make our area more attractive, and a family-friendly destination,” the mayor said. “It’s perfect for what we’re trying to accomplish in Daytona Beach. These are the brands we’re increasingly able to attract.”

“It will be a great impact for the area,” Chisholm said. “There will be some first-class hotel rooms we haven’t seen for a long time.”

The 43-year-old concrete block building, where every room has a view of the ocean, will be totally gutted, Naran said. Everything will be new down to the bathrooms, electrical and plumbing.

“The interior, it’s not even going to be comparable,” Naran said.

There could be sleek touches even to the bathrooms with things like glass sliding doors painted with beach designs.

The building structure is solid and held up well in Hurricane Irma aside from some roof damage, Naran said. But to meet modern demands, bathrooms need to be larger, and the hotel needs more outlets and capacity for a larger electrical load for cell phones and laptops.

The connector building between the 78,650-square-foot hotel and conference center will come out and a new piece will be built, he said. All utilities will be put underground.

The gutting process will be a familiar one for Naran. Premier Resorts & Management now owns five oceanfront hotels from Daytona Beach to Daytona Beach Shores that have all been major renovation projects.

“We don’t take shortcuts,” Naran said. “All were basically total gut jobs. We brought it back up to a quality that’s basically brand new. We think of ourselves as experts in those renovations.”

The 40-year-old Ormond Beach-based company — which has landed brands such as Hilton, Holiday Inn and Best Western — also has properties in DeLand, other parts of Florida, Georgia, South Carolina and North Carolina.

The Ocean Breeze Club property is open and operating now, but “it’s not a modern product,” Naran said.

‘Something to be proud of’

Premier Resorts & Management is pursuing a rezoning for the 2.4-acre property, something that will need the approval of the City Commission. That vote could come in February.

If any of those schedules are violated, the development rights under the agreement would lapse. The goal is to shut down the existing hotel operation in April, start construction right after that and then reopen as the Marriott Renaissance by late 2019.

“They’ve got an impeccable track record here,” Merrell said. “All of the projects they’ve been involved in are quality projects that we can stand behind. ”

Overhauling and running hotels is in Naran’s blood as well as his father’s, who jumped into the Daytona Beach hotel business in 1978.

“I actually grew up in a motel on the beach,” said Naran, whose childhood home was the Mainsail Motel in Ormond Beach. “We had a little hotel room up on the top floor.”

He said it means something to him to be bringing top-notch hotels to Volusia County.

Everything from the entrance, which he said “nobody else has,” to the decor subtly telling Daytona’s story would be unique.

“It’s hopefully the first of many things of this magnitude in Daytona Beach,” Merrell said.

“When we saw this, we were like, this is something Daytona Beach needs,” Naran said. “This is something to be proud of. I really love this city and this area, and I love to be able to show it off and be proud.”